Burke Virginia is one of Fairfax county's hidden gem for its prices and its unpretentious sophistication. Located off the beaten path, Burke exudes all the suburban tranquility that any reasonable homeowner would expect of Northern VA, but without the town centers, Metro Stations, and destinations that sometime make NoVa living constricting. Consisting of mostly single-family homes on large lots tucked amongst ancient trees, Burke often feels like you're much farther out than you are. Located only 21 miles from Washington DC (33 minutes by car,) Burke is a land of hikes, horses, little league, and the great outdoors. People come here for the serenity and stay for the community.

What’s there to do in Burke?

As we’ve stated, there are no malls here, no shopping destinations, outlets, concert venues or office parks. People come here to live peacefully and to raise families away from the distractions of more modern communities such as Reston. Living in Burke is a simpler type of living; a community that prides itself on its safety, schools, and family activities. When people have outings, they opt outdoors. With countless woodland areas, lake activities, hiking, trails, and sports teams (for adults and children,) residents of Burke are all about it! For shopping, dining, and other activities that don’t involve getting your heartrate up, nearby Springfield, Fairfax City, and Tysons Corner are most likely where you’re headed.

Burke Centre: The Pride of Burke

Residentially, the glory of Burke has to be the award-winning Burke Centre. In 2010 The United States Census Bureau gave Burke Centre its own designation, splitting it from Burke officially. Burke Centre is organized by areas of similar size and styled units that have been designed and built by the same builder. Each area of similar size and design residences (i.e., small single-family houses, townhouses, large single-family houses, condominiums, duplexes, apartments, etc.) is called a "cluster." The clusters are, in turn, organized into Neighborhoods, which are essentially based on the geography of the community.

(photo and breakdown courtesy of the Burke Conservancy)

In summary, Cluster Committees represent a specific area within their Burke Centre neighborhood. Each Cluster focuses on its own unique needs and issues. Cluster members communicate information to one another, attend Neighborhood Council meetings, hold social gatherings, develop street improvements, organize cleanups, etc. There are 65 clusters within Burke Centre. The Cluster is the basic building block of the Conservancy and the cornerstone of Burke Centre's management structure. Both owners and renters in good standing are eligible to serve on cluster committees. 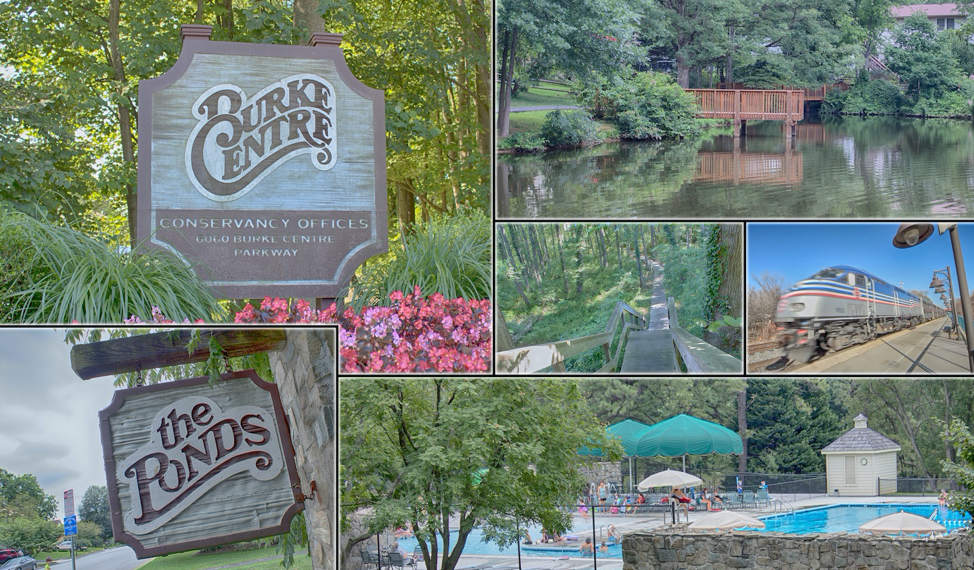 What’s happening in the neighborhoods?

Within each neighborhood (The Ponds, The Oaks, The Landings, The Commons,) there is a swimming pool, community center, basketball courts, volleyball pits, tennis courts, tot lots, open greenspace, and trails. Although each neighborhood has its amenities, residents of any cluster are free to use the other's facilities. Adding to the expansive list of offerings, Burke Centre has its own VRE station providing residents with a traffic-free option in and out of D.C. for work. Burke Centre Conservancy also hosts residents only events throughout the year. The annual Friends of Sadie Blood Drive, senior bus trips, Easter Egg Hunt, Earth Day Cleanups, Santa visits, and wine garden are just a few of the thing’s residents look forward to with their neighbors each year. However, the showstopping Burke Centre Festival is the where this neighborhood really shows its level of commitment to community. This year will feature "a huge Arts & Crafts Show, Karaoke, Fairfax County Police, Fire & Rescue displays, emergency preparedness area, live bands, dance and other entertainment, roving characters, a wide variety of festival food vendors, interactive wildlife shows, high-quality face painting, amusement rides, pony rides, a nursing mom's private tent, basketball toss, Midway-style games, tons of community booths, giveaways and drawings, an after-hours wine garden and much more."

Whether you're searching for the more rustic experience of Burke, or the communal, amenity-rich options of Burke Centre, this area is truly a haven from the bustle of Washington D.C. and NoVa's more aggressive suburbs. Burke and Burke Centre has everything you and your family could want or need within easy access to your home, but none more important than the peace, safety, and tranquility that comes along with these addresses.